The New York Times
“The finest showing of the performance, vocally and theatrically, was by Barbara Hocher, who made Birdie Hubbard a sympathetic character of exceptional intensity.”
(Regina, Wolf Trap Opera Company)
— Theodore W. Libbey Jr.

The Washington Post
“…was consistently out-acted and out-sung by the actress in the role of the tender, pathetic Birdie… Birdie was soprano Barbara Hocher, who brought considerable splendor to the Wolf Trap Company this summer as Fiordiligi in …Mozart’s Cosí fan tutte. Hocher has a large, resonant voice that she uses with considerable finesse. Her acting put all others in the shade, and she was rewarded with a long ovation at the scene’s end.”
(Regina, Wolf Trap Opera Company)
— Lon Tuck

The Washington Times
“…it was Barbara Hocher’s Birdie that carried Regina to the troupe’s greatest triumph in the last half dozen years. Hocher’s vocal and, especially, dramatic successes made hers the most memorable company soprano performance since Beverly Sills’ 1979 Guest Violetta.”
(Regina, Wolf Trap Opera Company) 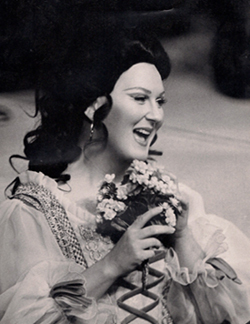 Lady with a Cake Box (Postcard from Morocco), Richard Braaten ©

The New York Times
“Miss Hocher’s big aria was simple and even sentimental, and she sang it with a lovely, nuanced, beautifully focused tone.”
(Lady with a Cake Box, Postcard from Morocco)
— Harold C. Schonberg

The Washington Post
“As the Lady with a Cake Box, Barbara Hocher’s scena provided one of the evening’s most gripping moments…”
(Postcard from Morocco, Washington Opera)
— Octavio Roca

The Washington Star
“Matching his vocal and dramatic intensity was Barbara Hocher (Lady with a Cake Box), whose ‘I keep my beloved in a box’ was once again one of the expressive pinnacles of the performance.”
(Postcard from Morocco, Washington Opera, 1981)
— Theodore W. Libbey Jr.

The Boston Globe
“Outstanding performance by Barbara Hocher as the shrill lady.”
(Birtwistle’s Down by the Greenside, Tanglewood)
— Michael Steinberg

New York Post
“Barbara Hocher, a lovely girl to look at, had an equally attractive lyric soprano and moved about the staff with ease and elegance as Fortuna…and as Drusilla.”
(L’Incoronazione di Poppea, New York City Opera)
— Speight Jenkins 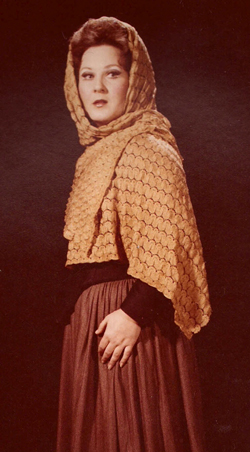 Haverhill Gazette
“Barbara Hocher took the role of Mimi and her voice was the model of taste and musical refinement, particularly in the final act when her farewell brought tears to the eyes.”
(La bohème, Boston Opera tour)
— Tom Vartabedian

The Washington Post
“Hocher performed spectacularly, in fact, in the St. Sulpice scene from Massenet’s Manon, with silvery tone, fine legato line and a graceful sense of the music’s form and style that added up to one of the most memorable moments in the whole program.”
(Opera Gala, Wolf Trap Opera Company)
— Joseph MeLellan

The Washington Post
“…It was fortunate that the finest singing came from Barbara Hocher as Fiordiligi. If you’re going to cast one role strongly, that’s the one. Hocher showed fine Mozart phrasing, really excellent coloratura and splendid vocal heft in places such as the finale of act one, where Fiordiligi’s voice must soar above the others in some of the most resplendent music Mozart ever wrote… The long lament in the second act was satisfying indeed.”
(Cosí fan tutte, Wolf Trap Opera Company)
— Lon Tuck

The Freeman’s Journal
“Barbara Hocher’s performance as Konstanze is a masterful portrayal….Hocher’s impassioned singing of the aria [Martern aller Arten] brought one of the longest and most deserved ovations of the performance.”
(The Abduction from the Seraglio, Glimmerglass Opera)
— Ted Potrikus

Albany Times Union
“One must start with Barbara Hocher as Konstanze. It would be well worth the trip to merely hear Hocher sing the extraordinarily difficult and beautiful aria, Martern aller Arten.”
(The Abduction from the Seraglio, Glimmerglass Opera)
— Vinny Reda

The Times Record
“Barbara Hocher stopped the show with a meltingly lovely aria in Act I, and elsewhere sang with full bodied tone.
(Cora, The Last of the Mohicans, Lake George Opera)
— Doug de Lisle 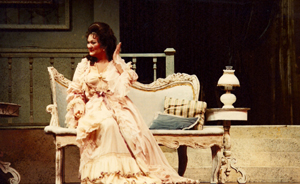 The Register-Guard
“Barbara Hocher as Rosalinda was the visual and vocal embodiment of Vienna. She was a strong, sure part of all the ensemble work.”
(Die Fledermaus, Eugene Opera)
— Sue Keene

The Washington Times
“Barbara Hocher as the housekeeper demonstrated again what a versatile actress she is, in addition to being a first-rate singer.”
(Mrs. Grose, The Turn of the Screw, Washington Opera)
— F. Warren O’Reilly 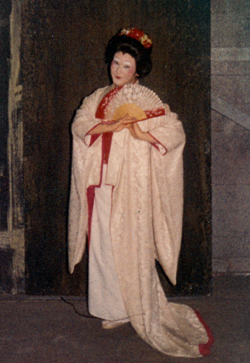 The Youngstown Vindicator
“Miss Hocher’s warm, floating soprano joined Pruett (the Duke) for an impassioned duet. Her high, clear tones created a mood of rapture. Then she demonstrated her artistry in switching from lustrous high tones to mellow ones with an enchanting interpretation of Caro nome.”
(Gilda, Rigoletto, Youngstown Symphony)
— Adrian Slifka

The Washington Post
“The heart of her artistry was her adaptability to the needs of each text.”
(Recital, Phillips Collection, Washington, D.C.)
— Cecilia Porter 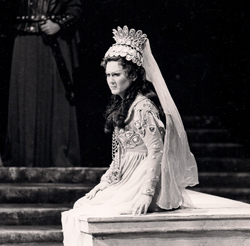 Pioneer Press
“In Barbara Hocher…they had exponents of vocal gleam and fine sense of line. Miss Hocher was particularly affecting in the velvet sweetness of her voice and her beautifully sustained and controlled cantilena.”
(Ilia, Idomeneo, Minnesota Orchestra)
— John H. Harvey

The Berkshire Eagle
“…immeasurably enhanced by the vocalism of soprano Barbara Hocher, whose execution of all the types of phonetics Berio indicates was remarkable.”
(Berio’s “Circles,” Tanglewood)
— Jay C. Rosenfeld