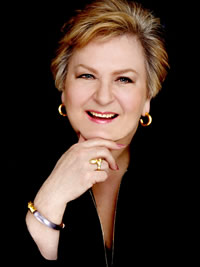 Barbara Hocher has enjoyed a multifaceted professional life as opera and concert singer; executive director of a nonprofit arts organization devoted to the vocal recital and the cultivation of gifted young artists; and corporate contributions officer at a major inter-national bank. Combining this background with her passion for classical music, especially the vocal arts, she now focuses on teaching and coaching singers, giving master classes on song and opera repertoire, lecturing on arts management, adjudicating vocal competitions, and consulting to nonprofit arts organizations in the areas of programming and development.

Born and raised in Houston, Texas, Ms. Hocher began violin studied at ten years of age. In high school she was chosen to participate in two renowned youth orchestras, Houston All-City Symphony and Texas All-State Orchestra. Her parents were volunteer church musicians and early involved their daughter in choral singing, but it was at North Texas State University, where she earned a Bachelor of Music degree in voice and violin, that she was inspired by song and opera literature. While completing a Master of Music degree in voice at New England Conservatory, she was a regional winner and national semifinalist in the Metropolitan Opera National Council Auditions. Awarded a Fulbright Scholarship, she accepted instead the Frank Huntington Beebe Fund Award for Study Abroad; this and additional study grants from the Metropolitan Opera, the Martha Baird Rockefeller Fund for Music, and the Sullivan Foundation enabled her to study voice, language, and repertoire in Germany France, and Italy for several years.

As a Corporate Contributions Officer at Citicorp/Citibank she managed the international and education/research grant portfolios. While working there she enrolled in the arts administration program at New York University and earned a Master of Arts degree. She was an adjunct professor at City University of New York’s Baruch College, coordinating and lecturing for the arts administration internship program. In 1991 she began a long professional relationship with the world-renowned opera singer Marilyn Horne, coordinating her professional engagements and special projects, and in 1993 becoming Executive Director of the Marilyn Horne Foundation, a nonprofit organization devoted to classical song and to gifted emerging artists.

Currently a consultant to the Marilyn Horne Legacy at Carnegie Hall, Ms. Hocher is also a voice and course instructor at Mannes College the New School for Music, and teaches voice privately in New York City. She gives master classes in opera and song repertoire as well as lectures and Q&A sessions for arts management students. Her master classes –  entitled INSIDE THE WORDS – have taken place at such institutions as DePaul University, Eastman School of Music, Illinois Wesleyan University, Manhattan School of Music, Opera New Jersey Young Artist Program, University of Houston, University of Louisville, and University of North Texas. She is a frequent adjudicator for voice competitions, such as the Gerda Lissner Foundation, Metropolitan Opera National Council Auditions, Marilyn Horne Song Competition at the Music Academy of the West, and Carnegie Hall’s The Song Continues Festival.